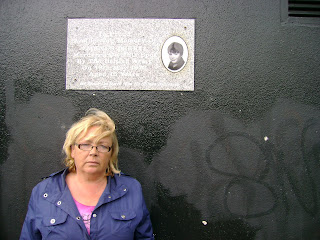 The family members, relatives and friends of Manus Deery will hold candlelight vigil on Thursday 19th May 2011 to mark the 39th anniversary of his murder at the hands of British troops.
On 19th May 1972, 15 year old Manus Deery, was sharing a bag of chips with his friends at Meenan Square in the Bogside when he was shot and killed by soldier 'A' from C Company, 1st Battalion, of the Royal Welch Fusiliers. Earlier on that day, Manus had just received his first pay packet.

Manus and several of his young friends were standing behind the Bogside Inn when the soldiers opened fire from the Derry walls. The soldiers claimed there was a gunman in the area at the time. Manus was struck by a bullet on the side of the head.

There was no evidence of an RUC investigation. The soldiers' version of events went unchallenged because their statements were taken by the Royal Military Police. No soldiers were ever prosecuted with his killing.
Speaking on behalf of the Justice for a Manus Deery campaign, his sister Helen said that “It’s been 39 years now since the murder of my brother and to this day our family like many others have yet to obtain any sense of justice.  Even after all these years I feel it’s a duty to both Manus and to my family, that my brother will not be forsaken. We will continue to fight for justice.
“Following the murder of our Manus there was never any actual investigation or inquiry into the brutal murder of my brother. There was of course a ‘tea and sandwiches’ interview for the soldier that took our Manus’s life.  Several witnesses to the murder that day have only been interviewed within the last number of years.
“It’s our belief that there are major inconsistencies in the reports involved and also in the original inquest into his death. The soldier involved, as many others, used the shield of a British uniform which allowed them to murder innocent children with impunity. Those involved have hid behind their uniforms in an attempt to evade justice, and so far they have.
In closing Helen Deery said “I would like to call on all political parties, as well as all those families who have fought or continue to fight for justice, to come out and support the Deery family in our campaign for justice.  In doing so I would also like to ask anyone who may have any influence to stand with us as we continue to demand a fully independent investigation for Manus Deery”.
This Thursday evening at 7.30pm, May 19th 2011, a candlelight vigil will take place at the spot of Manus’s killing in Meenan Square and everyone is welcome to attend.
Posted by Justice for Manus Deery Campaign at 12:17

In Solidarity for Justice 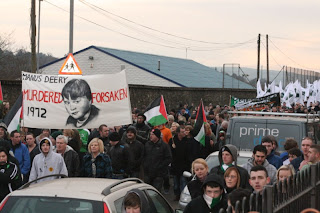 This annual commemoration march takes place in Derry is seen as a platform for other campaigns for justice from Ireland and across the world to hihglight the contiued struggle against injustice. 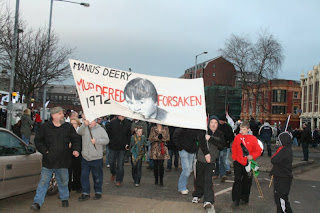 Among those who attended this years event in solidarity with the Bloody Sunday families have been the family and relatives of those murdered on August 9th & 10th 1971 in West Belfast at the hands of soldiers from the British Army's Parachute Regiment.

This murderous act happened just five months prior to those killed and injured on Bloody Sunday. The event itself became known as the Ballymurphy Massacre.

Background to the Murder of Manus Deery 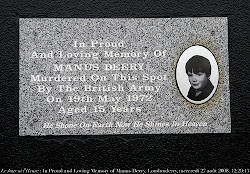 Plaque erected in memory of Manus 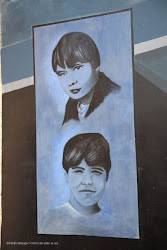 Mural to the memory of Manus in Rossville Street 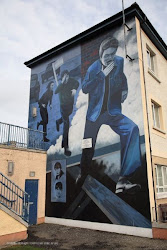